Two weeks ago, we visited my MIL and she was dying to take Will to see Santa. We were unprepared for this impromptu Santa trip, so he was dressed in play clothes, rather than the usual finery I would prefer. I was also not dressed for the occasion, having only decided last minute to join M and Will on their trip, and not even wearing makeup. But I figured, what the hey, we need to get a Santa picture this year and it will make my MIL happy.

We are used to pretty fancy-dancy Santas here in our area. It's usually a rather professional set up, complete with a digital viewing of your pictures and printouts and CD ready to take on the spot. Well, this was in the basement of an oldie-but-goodie kids toy store, and it was less-than-professional.

First off, you couldn't see the pictures before ordering them. And I am positive it was not a good picture. I was in it, Will was crying, and well, I just have no hope for the pictures. But I also feel badly when you take up someone's time and then not buy the pictures. They had no CDs available, couldn't take credit cards (we barely had enough cash), and didn't give receipts. It's been two weeks (we were supposed to get the pictures within a week) and we haven't heard a thing. I figure we just made a nice donation to their fund. Tis the season, right?

But the part that, shall we say, reeked of unprofessionalism? Santa himself.

The jolly old man was decidedly jolly, all right, and reeked of the liquor that had put him in such good. . . uh, spirits. The good news is that he didn't seem to mind Will's reluctance to sit on his lap and even eagerly invited me to sit on his knee. The bad news? He told Will that he would bring him coal for Christmas since he'd been a naughty boy. Coal?! Naughty boy?! Now, I know he probably didn't understand a word, but what kind of Santa tells a kid that he is naughty and is getting coal? And, for the record, although he didn't want to sit on Santa's lap by himself, he wasn't naughty and actually waved goodbye to Santa when it was all done and told him "tank you."

Fortunately, we have the picture from yesterday to make up for it! I present to you our Christmas 2009 Santa Picture. . . pay no attention to the knee behind the curtain! 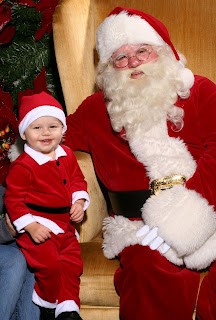 I love BOTH pictures, and Will is adorable AS USUAL. You look fantastic, too.

I have to tell you, I just now watched the mac-n-cheese and it is HILARIOUS!!!! I made my hubby watch it right away. Oh my goodness. Too cute.

That tale is priceless!!!

But the photo of Will is amazing :o)

That is a great picture! It makes me wish our Santa did the secret "Mommy Behind the Curtain" thing.

Awwwwe he is so sweet and very handsome. I hope your Christmas is a good one.