I think that there was a turning point in my motherhood journey this week.

It could have been the extra sleep that Will is finally allowing me, or it could have been the way that the stars and moons aligned. But something changed.
I still had my moments, but instead of feeling overwhelmed by them, I actually felt that I rose to the occasions. I did a lot more laughing than crying. I felt more in tune with his needs, more able to meet them before he even knew he had them. As a result, Will did a lot more smiling than crying this week, too.
I believe that the true turning point came on Tuesday, when I went to the grocery store. Usually, I race through the aisles, trying to "Beat the Clock," or basically, get my shopping done and get out of there before Will wakes up and starts wailing - which he invariably starts doing in the check out line. For some reason, I put him the Baby B.jorn instead of leaving him in the car seat as usual, and he loved it! We walked around the grocery store for almost an hour. I had no less than ten people comment on how happy and relaxed my baby was. And he was! He just looked around the whole time, smiling and cooing and charming the heck out of people - including me! It was magical.
Having the "B.jorn Backup" made me feel more comfortable and confident in taking him out. We went to Cost.co the next day! That time, he stayed in his car seat, but just knowing that I could make him happy with the carrier boosted my confidence. I got out more this week than I have in previous weeks and it felt good to join the human race a bit again.
I also started allowing myself to take naps with him. It is the most incredibly bonding and calming thing to nap with my son. I feel our breath and heartbeats synchronizing and I feel at peace in the world. I do find that I sleep lightly, but heck, at least I am sleeping! Before, I had been so caught up in getting him to nap on his own. But after reading more into sleep habits and training, I have come to the conclusion that it really doesn't seem to hurt them at this early age and so I have decided to enjoy it while it lasts. Someday, he won't think it's so cool to nap with Mom.
Here are some of my favorite moments from Will's eighth week!
The smiles are getting bigger and better. . . 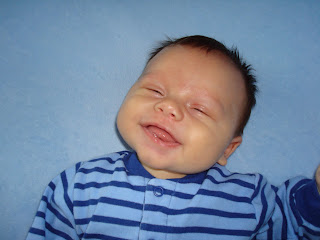 Such a popular boy - He already has a ton of friends. . . 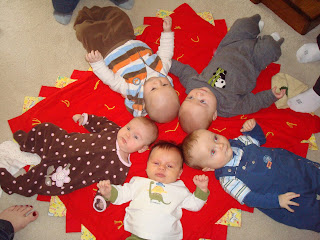 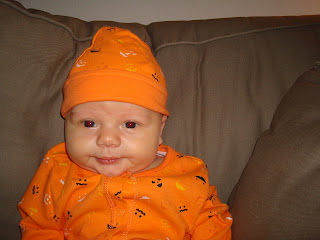 Last but not least, this is how M found us when he came home tonight . . . 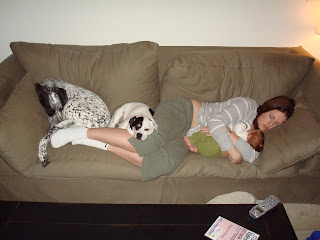 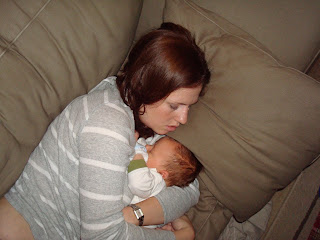 OMG!!! Those pictures are sooooo adorable. I love the group shot and the last couple of you guys sleeping (with those huge dogs curled up, too!).

Will is definitely going to get a lot more fun in these next few weeks. Not that he wasn't fun before, but he'll be awake more and start to reach for toys and gurgle!!!

That's so great! He is ADORABLE (and so are you.) I love napping with my twinkies. I lay them on my chest and we snooze on the couch almost every afternoon. Sometimes just one of them, sometimes both! It's AWESOME sleep...and since they are on my chest I don't worry about rolling on them. Plus it's pretty great laying on my back after so long on my side. :)

I have grown to love the carrier this week, too. No trips to the grocery store, yet, but maybe one of these days soon...

How adorable....I'm so glad you could catch up on some sleep and enjoy motherhood that much more. Babies can be tricky, they are all different and it can take some time to figure them out! You are doing so well and I'm you are smiling again!

That smile is just too much! How handsome is he?! And the pic of you sleeping with him brings tears to my eyes.

I still nap and cosleep with Nate. It really makes me feel so bonded with him. I know it is probably a bad habit - even my pediatrician has recommended we stop - but I just can't bring myself to do it. He's only this small once and I want to soak up every moment.

Gorgeous pictures! I love the nap ones.

I am so glad that things are settling down. You are doing great!

You guys are precious!! I am really enjoying your journey, and have been stocking up on the baby sleeping books early- just like you recommended! hugs

YEAh! how awesome is it to just feel relaxed!!

Great photos! He is so cute, it's insane.
The turning point thing is awesome... I am so thrilled for you!
*hugs*

Those are some cute pictures. I love the doggies taking a nap with y'all. Too cute!

Glad to hear that things are getting better.

He's so beautiful! I was going to ask about the logistics of your napping together. Do you always sleep on the couch like that with him or do you ever try to sleep in your bed? Sorry for the questions - I'm 20 weeks and just trying to figure these things out. :)

Jillian loves the Baby Bjorn like carrier. Jeramy carried her in it when we went shopping the past couple of Sundays and she stayed conked out the entire time. Plus he looked so cute carrying her around (but don't tell him I said that!)

Those pics are too cute!!