What a weekend! What a party! I am ridiculously tired after all of the festivities that Will's First Birthday brought to us.

We had weekend guests, dinners out, and, of course, the BIG party. Somehow, it all worked out, and I am pretty sure Will enjoyed his first birthday from start to finish.

The party went well, and I am fairly certain it was due to my over-zealous planning. In the end, however, it was all about Will and he had a great time, so that was worth it.

My advice for those of you still planning the party is as follows:

Serve food (if you are having it) right away. And then do the cake for the birthday honoree and gifts right away. A lot of people with kiddos are going to have to leave for naps and such, so get the main events out of the way so people can leave when they need to.

2) Have it someplace other than your house.

We chose a park and it was perfect. I wasn't worried about people spilling on my carpet or too many people in my crowded kitchen. When it was over and Will was tired, we didn't have to worry about people lingering too long. We stayed a not-rude amount of time (2 plus hours) and then left when the Birthday Boy got tired.

I planned for a pinata and sidewalk chalk, bubbles, etc. No one used any of that and the pinata pretty much went to waste. Unless you have a lot of older kids, I wouldn't bother, as it felt like a waste of time.

4) Don't cook, bake, make, or prepare in any fashion. Time is money.

I did pizza. I had it delivered to the park. It was perfect. I ordered based on two slices per person and had some veggie and fruit trays that I bought pre-made from a grocery store. I also had two liters of soda, bottled water, and juice boxes. I think we spent about $100 for food for 45 people. No making anything and no picking anything up. I loved it and it took a lot of stress off of me. I guess I could have saved some money by making things myself, but I do believe that my time is worth something, and I don't think that I could have saved a lot.

5) Remember the point of the party.

I'm not going to post about it here, but there was some drama. Family crap that is not worth wasting my time here on. I started to get worked up, but then I looked at my little boy's face. He was eating his first bites of pizza, playing with his balloons, and charming the pants off of his party guests. I realized that all of the other stuff didn't matter. M hugged me close and I felt the miracle of everything overtake the minutae.

Here are some pictures of the party for your viewing pleasure. 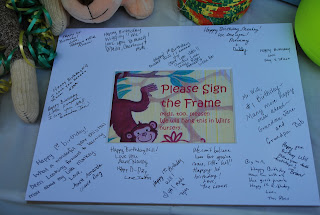 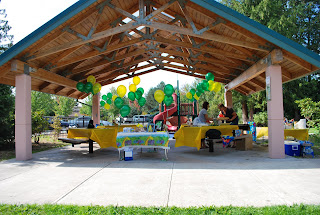 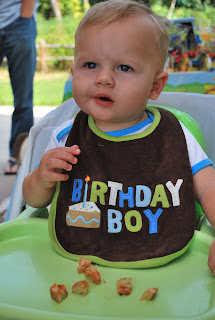 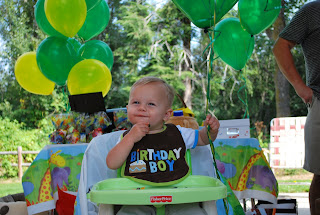 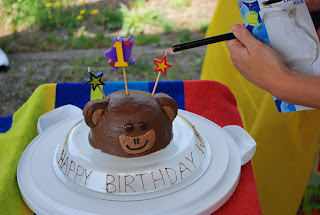 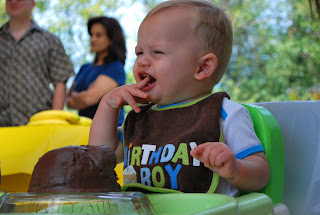 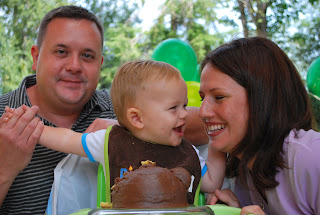 Wonderful! And thanks for the advice, I will remember it.

That cake is so cute!

In Search of Morning Sickness said...

You know what? I really want to thank you for your "pointers". I definitely will remember that for my little girl's 1st birthday. You obviously did an AMAZING job. The balloons and pavillion look great! And I love the bday boy bib!!!

That last picture brought tears to my eyes. Look at how your son is smiling at you - and you just beaming back. You are giving him a HAPPY childhood. A really blessed loved one. That is all he will know, the love from you and your husband. What a beautiful gift you can give him - the best gift!!! Remember that always!

A million thank yous!!!! If I were there, I'd kiss you square on the lips.

We have started plans for our 1-year shindig and I've been wondering what I should do about food and activities. I'm going to 100% follow your advice, and will talk to Scott about pizza. I was thinking we'd just have finger foods but I think pizza is even easier, and something that E&R can enjoy as well!

p.s. we have the Carter onesies that match those bibs. SO cute!

It sounds like it was a wonderful party (minus the drama, of course). I'm so glad that Will had fun!

Thanks for all the advice! We are rapidly approaching the big day. We have a date and time (and an evite :) but that's about as far as we've gotten. We thought we had a venue (picnic area at a local park) but it can't be reserved in advance (and the outdoor places in town that can be reserved all close for the season this weekend), plus we're worried about rain. We may just brave it and move it to our house in case of bad weather. As for food, we may do potluck -- friends did, and it worked out really well. Then we'll just be responsible for one dish, plus drinks and cake, which seems managable.

We did sandwiches, also pre-ordered and delivered. But I did make cakes myself. However I am no chef.... :)

Great advice! Love the Smash Cake;) Glad you and Wil enjoyed yourselves.

I LOVE that last picture! How adorable! I can't believe he's ONE! I feels like you were getting "the call" saying you were pg and subsequently blogging aobut it just last week. Happy beginning-of-the-second-year to you, momma, I hope it's as fantastic as the first one was!

haven't commented for awhile- but ADORABLE!!! Love that last pic, so beautiful.

Great tips...and it looks like your little one had a wonderful time! How quickly times flies, doesn't it?

Happy ICLW and thanks for stopping by my way!